Warning: count(): Parameter must be an array or an object that implements Countable in /home/customer/www/icam-vn.com/public_html/wp-content/plugins/imevent-common/custom-metaboxes/init.php on line 746
 Dr. Hoang Anh Hoang | ICAM-VN 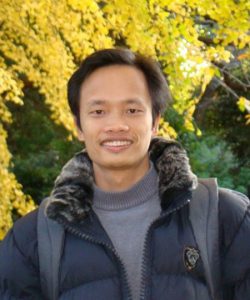 Title of the talk: Phage-based solutions for emerging problems in food safety and aquaculture diseases in Vietnam

Bacteriophage (or phage) is virus infecting only bacteria. It has been employed in detection and control of specific and pathogenic bacteria. In the terms of application, phage has shown many advantages such as: (1) high specificity – phage normally infect only the targeted bacterial species, (2) high replication rate – hundreds of new phages produced after a short time of life cycle, (3) no serious side effects have been described, (4) selecting new phages is a relatively rapid process that can frequently be accomplished in days or weeks. Firstly, in this talk, we will show our works on development of new phage-based method for rapid and simple detection of E. coli in food samples. A new rapid and simple method was developed for the detection of E. coli by constructing recombinant phages. The color change indicating existence of targeted E. coli could be visually perceived. The method has been examined to detect E. coli in food samples such as apple juice, ready-to-eat fresh vegetables at markets in Ho Chi Minh City,… Secondly, phage therapy developed to treat some aquaculture emerging diseases in Striped catfish (Pangasianodon hypophthalmus) farmed in the Mekong Delta Vietnam (MKDVN) is shown. The striped catfish importantly contributes to national aqua export. However, currently, aqua diseases occur more frequently leading to a significant reduction in production output across the entire region. Usage of antibiotics as a measure of prevention and treatment has showed an inadequate control and has led to the following alarming results of output reduction, export loss, community health and environment degradation. Therefore, the work is to show possibility of phage therapy as an alternative solution to treat pathogenic bacterial infections in striped catfish farmed in the MKDVN.

Hoang Anh Hoang has obtained his PhD in Biological and Environmental Engineering from Tokyo Institute of Technology (Japan) in 2014. He has worked at Department of Biotechnology, Ho Chi Minh City University of Technology (HCMUT) since 2014. His research group focuses on science and engineering of phages and solid waste treatments. The research group now has collaboration with scientists in Vietnam, Japan, UK and Canada to investigate and apply proper solutions to solve problems of food safety and environment in Vietnam. He is PI of three research projects funded by NAFOSTED (Vietnam), IFS (Sweden) and JICA (Japan).