Warning: count(): Parameter must be an array or an object that implements Countable in /home/customer/www/icam-vn.com/public_html/wp-content/plugins/imevent-common/custom-metaboxes/init.php on line 746
 Professor Virendra S. Bisaria | ICAM-VN 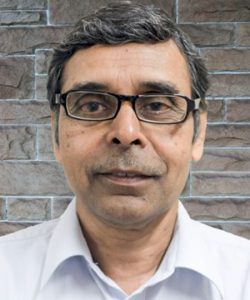 Title of the talk: Process Development for Bio-fertilizer Production and Application

To develop sustainable, low-input but highly productive agricultural practices for better management of soil resources, a suitable biofertilizer technology is required to facilitate product delivery to the field for enhanced crop productivity. Fluorescent pseudomonad strains R62 and R81, isolated from Indian soil, are the root colonizing rhizobacteria that have growth- promoting effects on many plants. These plant growth promoting rhizobacteria (PGPR) produce a hydroxamate-type siderophore that chelates iron and makes it available to the plant roots and 2,4-diacetylphloroglucinol (DAPG), an antibiotic that suppresses fungal pathogens. The presence of the siderophore and DAPG in the bioinoculants’ formulations was found to limit the presence of natural contaminants in non-sterile carriers to acceptable limits, thereby obviating the need of costly three-time sterilization of the carriers. It was, therefore, desirable to have these two metabolites in the culture broths so that they are present in the bioinoculants’ formulations when applied to the field. The purpose of the present study, therefore, was to develop suitable process strategies which can be easily applied at an industrial scale. The cultivation of the strains was carried out in fed-batch mode with the objective to produce increased biomass, siderophore, and DAPG. LabVIEW software- based computer controlled system was established which achieved flexible and automatic monitoring and control of process parameters. The closed loop feedback strategy using pH signal was found to be the best for fed-batch cultivation of the pseudomonads to realize these goals. This culture produced very high cell counts to the order of 2.7 x 1010 cfu/ml. Further, a formulation consisting of the two pseudomonads in an inorganic carrier- based medium was developed for bacteriaization of the wheat seeds. The effectiveness of the application of the PGPR formulation (in combination with arbuscular mycorrhizal fungi) has been demonstrated for wheat crop.

Prof Virendra S Bisaria is Professor at Department of Biochemical Engineering and Biotechnology, Indian Institute of Technology Delhi, New Delhi, India. His research interests include Lignocellulose Bioconversion for Biofuels and Bioproducts, Biofertilizers, and Plant Cell Technology. He has published more than one hundred research papers in peer-reviewed international journals. He is an editor of Journal of Bioscience and Bioengineering, and an Editorial Board member of Process Biochemistry and a new journal, Bioresources and Bioprocessing. He along with Prof A. Kondo has edited the book “Bioprocessing of Renewable Resources to Commodity Bioproducts, which was published by Wiley in 2014. He was a member of the team that developed the fed-batch cultivation technology for mass production of biofertilizers which has since been transferred to a large Indian industry. He is a Vice President of Asian Federation of Biotechnology (AFOB), a member of Bioprocess and Bioseparation Engineering Division of AFOB, and President of AFOB- India Chapter.