Warning: count(): Parameter must be an array or an object that implements Countable in /home/customer/www/icam-vn.com/public_html/wp-content/plugins/imevent-common/custom-metaboxes/init.php on line 746
 Professor Nguyen Duc Hoang | ICAM-VN 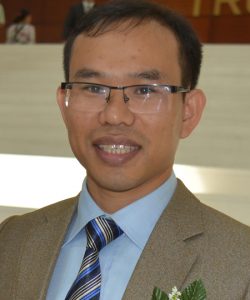 Title of the talk: Non-inducible and IPTG-inducible expression vectors for protein production based on Pgrac promoters for Bacillus subtilis

Bacillus subtilis possesses excellent properties to be considered as a host for protein production. These properties include GRAS status and available large scale production. Also, this endotoxin-free bacterium confers significant advantages to producing recombinant protein products for animal and human uses. The development of these products requires efficient optional expression systems for this bacterium. Here, we will present a topic on the development of pHT expression vectors based on the promoter Pgrac family to produce recombinant proteins in B. subtilis, which can use in an IPTG-inducible or non-inducible manners. First, we introduced a new synthetic promoter Pgrac derived from B. subtilis groESL promoter and E. coli lac operator, which can be induced by addition of IPTG. This promoter is 50 times stronger than Pspac, the most popular IPTG-inducible promoter used for B. subtilis. Second, by changing the core promoter elements and the mRNA stabilizing elements to make an 84-promoter library, we showed that the second generation of Pgrac promoters could enhance production levels more than 30% of total cellular proteins in B. subtilis. Third, we generated potent expression vectors containing a second generation promoter of Pgrac family, which could be used to produce efficiently intracellular or extracellular recombinant proteins in B. subtilis. Finally, we will update recent development of novel non-inducible vectors using the IPTG-Pgrac promoter, which allowed production of recombinant proteins without the addition of IPTG. The use of IPTG-inducible and non-inducible expression vectors harboring Pgrac promoter will promise to bring enormous benefits to industrial applications.

He has completed his PhD at the age of 30 years from University of Bayreuth (2003 – 2006) and postdoctoral studies from Max Planck Institute for Molecular Physiology (2006 – 2011). He is appointed as an associate professor in 2015 and currently the head of the department of microbiology and director of Center for Bioscience and Biotechnology, belonging to VNUHCM-University of Science, Vietnam. He has published more than 25 papers in reputed journals. The pHT expression vectors for B. subtilis, delivered to scientists by MoBiTec, were initially constructed in Germany and continue to develop in Vietnam.