Warning: count(): Parameter must be an array or an object that implements Countable in /home/customer/www/icam-vn.com/public_html/wp-content/plugins/imevent-common/custom-metaboxes/init.php on line 746
 Professor Wen-Chien Lee | ICAM-VN 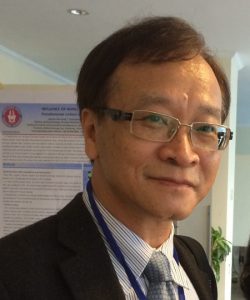 Optically pure lactic acid is required for the synthesis of poly-lactic acid (PLA). In this study, a strain CCU-8 that can produce lactic acid in significantly high level was isolated from bovine rumen using an enrichment culture medium containing monensin under the anaerobic conditions. This novel strain was identified as an E. coli and used for the production of lactic acid on glucose.  In fermenter, it could produce 40.6 g/L of lactate from 100 g/L glucose with a yield of 0.54 g/g.  Production strains for optically pure lactic acids can be obtained by genetic engineering on this rumen E. coli.  E. coli CCU-8 (ΔD-ldhA), for example, was obtained by deleting the D-ldhA gene encoding D-lactate dehydrogenase A.  The product yield was increased to 0.62 g/g, while the optical purity of L-lactic acid was found to be more than 99%. In addition, E. coli CCU-8 (Δpta, ΔL-ldhA), was obtained by deleting genes of phosphotransacetylase (pta) and L-lactate dehydrogenase A (L-ldhA). Optically pure D-lactic acid was produced at high product yield using this double-knockout strain.  A lactic acid yield of 1.02 g/g could be achieved by CCU-8 in which the dominated gene in the pathway of acetic acid formation (pta) was removed.

Dr. Wen-Chien Lee is professor in Department of Chemical Engineering and Director of Systems Biology and Tissue Engineering Research Center at National Chung Cheng University.  He received his B.S. and M.S. in chemical engineering from National Taiwan Institute of Technology and Ph.D. from Purdue University (1989).  He has served as a visiting professor in Cornell University (USA, 2001) and Kasetsart University (Thailand, 2014) and chairman of Department of Chemical Engineering at National Chung Cheng University.  In past three years, he was the President of the Biotechnology and Biochemical Engineering Society of Taiwan (BEST) and deputy secretary general of the Asian Federation of Biotechnology (AFOB).  He has published 98 international journal papers and book chapters.  His current research interests are proteomics, biomagnetic particles, production of proteins and biomass-based chemicals.